“The American Dilemma: Foreign Contract Labor and the Making of U.S. Immigration Policy”

This book examines a fundamental dilemma in American history – the tension between nativism against foreigners and demand for their labor. By locating the origins of this dilemma in the federal government’s attempts and failure to implement alien contract labor law to restrict the immigration of contract workers from Asia, Mexico, Canada, and Europe in the Gilded Age and Progressive Era, the book reveals how the debate over imported labor gave rise to a national immigration regime in the United States. In doing so, it illuminates the intersections of law, labor, capitalism, racial politics, and overseas expansion in long-nineteenth-century America, offering a new synthetic interpretation of the history of U.S. immigration policy.

This project re-conceptualizes the history of U.S. immigration policy. Scholars have generally assumed that the introduction in the 1880s of the first federal immigration laws, which excluded Chinese workers and destitute Europeans, established immigration control as a national matter. But I argue that sentiment against the Chinese and the foreign-born poor was largely concentrated in seaboard states, making immigration control ultimately a regional affair. “The American Dilemma” demonstrates that broader concerns about foreign contract labor transformed immigration control to an issue of national significance advocated even in interior and border states. The book thus substantially revises our understanding of the nationalization of immigration control in the United States.

The book also reveals the previously overlooked, critical role of the Japanese in the formation of the U.S. immigration regime. While covering multiple groups, the book places a strong focus on the experience of the Japanese. The contract labor law was part of general immigration laws applicable to all non-Chinese immigrants. My book reveals how the racist use of the technically color-blind general laws, which would become the norm in U.S. immigration policy, originated in the exclusion of Japanese contract workers in the Pacific Northwest at the turn of the twentieth century. I have published this aspect of the project as an article in American Quarterly.

Japanese Immigrants and US Immigration Laws to 1924

Still in an early stage of research, this project will explore the relationship between Japanese immigrants and US general immigration laws to 1924. While historians have extensively studied the Gentlemen's Agreement of 1907-1908, this book situates the Japanese in the broader context of the evolution of federal laws to regulate general immigration to the United States. Based on extensive research on previously unexplored Japanese-language sources at archives in Japan, the project also illuminates the intersection of Japanese emigration and US immigration laws as well as the Japanese view of the US immigration system.

This long-term project provides a synthetic history of American nativism from the American Revolution to the present. Under the organizing theme of “democratic intolerance,” the book reveals how nativism gained social and political support when foreigners appeared to threaten: (1) democratic political institutions, (2) Americans’ economic independence regarded as vital to the health of American democratic society, and (3) the sense that the integrity of American democracy depended on racial and cultural homogeneity. By demonstrating how the idea of democracy could function as a tool for marginalizing particular groups of foreigners and removing them from the nation, this book illuminates the fundamentally contradictory tension within American democracy between inclusion and exclusion.

My first book, Expelling the Poor, is a social and legal study that fundamentally revises our understanding of the origins of immigration restriction in the United States, especially deportation policy. The book locates the roots of American immigration control in anti-Irish nativism and economic ideology in nineteenth-century New York and Massachusetts, in contrast to previous studies’ traditional focus on anti-Asian racism in the West.

Historians have long assumed that immigration to the United States was free from regulation until the introduction of federal laws to restrict Chinese immigration in the late nineteenth century. But the influx of impoverished Irish immigrants over the first half of the nineteenth century led nativists in New York and Massachusetts to develop policies for deporting destitute foreigners to Europe.

Expelling the Poor demonstrates how the policies in Atlantic seaboard states, which were driven partly by ethnic prejudice against the Irish but more fundamentally by economic concerns about their poverty, laid the foundations for federal immigration laws.

By tracing a transatlantic circle—the passage from Ireland to North America, the process of removal from the United States, and the postdeportation experience in Britain and Ireland, the book also reveals how American deportation policy operated as part of a broader transnational legal culture of excluding non-producing members from societies in the Atlantic world.

I published portions of this project in two articles: 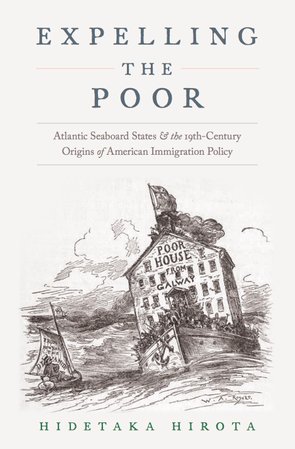