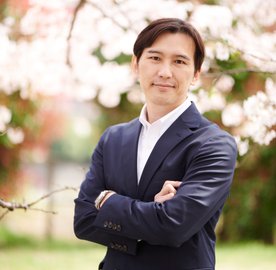 I am an Associate Professor of History at the University of California, Berkeley. I am a social and legal historian of the United States with particular interests in immigration. Broadly trained in European and Asian immigration history, I specialize in nativism and xenophobia; immigration law and policy; labor; the US and the World; and global migration.

I am the author of Expelling the Poor: Atlantic Seaboard States and the Nineteenth-Century Origins of American Immigration Policy (Oxford University Press, 2017). It received the First Book Award from the Immigration and Ethnic History Society, the Lois P. Rudnick Award from the New England American Studies Association, and the Donald Murphy Prize from the American Conference for Irish Studies, as well as Special Commendation for the Peter J. Gomez Prize from the Massachusetts Historical Society and Honorable Mention for the Peggy O'Brien Book Prize from the Irish Association for American Studies. The publication of the book was supported by the American Society for Legal History Paul L. Murphy Award.

My peer-reviewed articles have appeared in top journals in the fields of United States History, American Studies, and Migration Studies, such as the Journal of American History, American Quarterly, the Journal of American Ethnic History, and the Journal of Ethnic and Migration Studies. These articles won best essay awards and distinctions from multiple scholarly associations, including the Organization of American Historians Louis Pelzer Memorial Award, the Immigration and Ethnic History Society Carlton C. Qualey Award, and the Society for History in the Federal Government James Madison Prize.

I am currently working on two book projects. One is titled "The American Dilemma: Foreign Contract Labor and the Making of U.S. Immigration Policy." The book examines a fundamental dilemma in American history – the tension between nativism against foreigners and demand for their labor. By locating the origins of this dilemma in the federal government’s attempts and failure to restrict the immigration of contract workers from Asia, Mexico, Canada, and Europe in the Gilded Age and Progressive Era, the book reveals how the debate over imported labor gave rise to a national immigration regime in the United States. The other project investigates the relationship between Japanese immigrants and US immigration laws to 1924, based on bilingual research involving previously unexplored Japanese-language sources.

As a long-term project, I am working on a book titled “Democratic Intolerance: The History of American Nativism,” which provides a synthetic history of anti-immigrant sentiment in the United States from the American Revolution to the present.

I deeply value scholarly communities and public engagements. I have served on committees of the Organization of American Historians, the Immigration and Ethnic History Society, and the Society for Historians of American Foreign Relations. I am also a member of Migration Scholar Collaborative and the editorial board of the Journal of the Civil War Era. I have written opinion pieces on immigration policy and nativism for major newspapers, such as The Washington Post and The Irish Times, and have been interviewed on these topics by various venues, including C-SPAN, The Atlantic, and the Center for American Progress.

I received my Ph.D. in History from Boston College, where my dissertation won the university’s best humanities dissertation award. The dissertation also received the Cromwell Dissertation Prize from the American Society for Legal History. Additionally, it was selected as a finalist for the Society of American Historians Allan Nevins Prize and the Julien Mezey Award from the Association for the Study of Law, Culture, and the Humanities. Before joining UC Berkeley, I served as a Mellon Research Fellow in the Society of Fellows in the Humanities at Columbia University and taught at the City University of New York-City College and Sophia University in Japan. 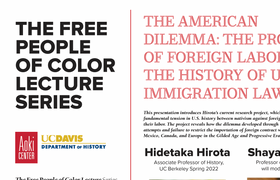 I delivered a research presentation in the Aoki/History-People of Color Seminar Series at the University of California Davis School of Law on April 19. 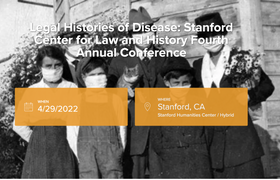 Presentation at Stanford Center for Law and History

I participated in the Legal Histories of Disease Conference at the Stanford Center for Law and History on April 29. The title of my paper was "Japanese Immigrants, Trachoma, and US Border Control." 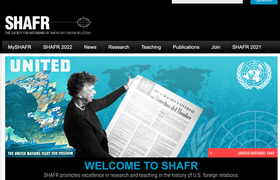 I will participate in a roundtable on migration at the annual meeting of the Society for Historians of American Foreign Relations (SHAFR) on June 11.